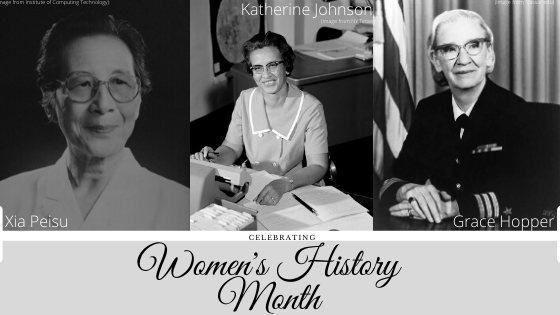 The History behind Women’s History Month

March marks the beginning of Women’s History month, a month designated to recognize the contributions of women in society, throughout history. What was originally known as “Women’s History Week” in 1982, has deservedly transformed over the years into an entire month aimed at celebrating the vital role of women both nationally and internationally. This year’s theme for Women’s History Month is the “Valiant Women of the Vote,” which honors all the “brave women who fought to win suffrage rights for women, and for women who continue to fight for the voting rights of others” (Women’s History.org). Although the theme specifically shines light on the suffrage movement, it does not fail to recognize all the women in history who have made significant contributions elsewhere. We, at 1855 Capital would like to kick off Women’s History Month, by also recognizing three women in the STEM fields whose impeccable track records have helped shape society today!

The first woman in history we would like to recognize is Xia Peisu. Peisu, dubbed in China as the “Mother of Chinese Computing,” is a computer pioneer who has influenced the realm of computer science through her work as an educator and engineer. A quote from a BBC article, explaining Peisu’s contributions states that:

From this, we can see how much all of Peisu’s efforts can be attributed to the transformation of the computer science and technology industry in China. Even further, Peisu valued education and the pursuit of knowledge when it came to innovation. She led multiple cohorts of students, whom she trained in various fields of her expertise. Aside from education, one of Peisu’s most celebrated efforts is her design of the 150AP, a high-speed array processor that enabled computers to exceed at 20 million operations per second in 1981.

Xia Peisu is surely a woman in history to be recognized.

If you are following our Twitter page, you would know that we recently celebrated the life of the late Katherine Johnson (August 26, 1918- February 24, 2020). Whether it was for her intelligent calculations on NASA’s launch of Project Apollo, or from her Presidential Medal of Freedom awarded to her by President Barack Obama,–which is America’s highest civilian honor– Johnson’s continuous hard work and tenacity did not go unnoticed. Johnson was an “American hero,” NASA Administrator James Bridenstine says, and “her pioneering legacy will never be forgotten” (NASA).

In addition to her incredible strides of progress in mathematics, it is also worth noting Katherine Johnson’s cross-cultural & cross-identity experiences and accomplishments as a Black woman who lived in the era of Jim Crow. In 1939, she became one out of three Black students to integrate West Virginia University as a graduate student in the math program. During her 33 years of service at National Advisory Committee for Aeronautics (NACA which later became NASA), she was amongst hundreds of other female mathematicians (known as “computers”) whose efforts were often unheralded. Additionally, there were only a small  number of Black women who served as mathematicians at this space agency (NY Times). In 2015, President Barack Obama is quoted saying “Katherine G. Johnson refused to be limited by society’s expectations of her gender and race while expanding the boundaries of humanity’s reach.”

The works of Katherine Johnson and her colleagues were also depicted in the film, “Hidden Figures,” where actress Taraji P. Henson played the role of Mrs. Johnson as the central figure. Throughout her lifetime, Katherine Johnson was committed to the advancement of technology and her communities, which is why we celebrate her life and all of her accomplishments.

The late Grace Hopper (December 9, 1906 – January 1, 1992), also known as “Amazing Grace” to her subordinates, was a true example of what it meant to be committed to the future of technology. Throughout her entire career, Hopper worked endlessly to promote the idea that computers would be ubiquitous to modern-life. Because of her confidence in the future of computer science, Hopper emphasized the importance of being able to communicate to several audiences in the general public, as well as those in the engineering and data processing industries. Hopper also wrote the first computer language manual for the Mark I computer, in which she helped to configure at Harvard University in the 1940’s during World War II (Yale).

Hopper attempted to join the Navy during WWII but was rejected due to her age (34) so instead joined the US Naval Women’s Reserve. Always persistent in December of 1943, after leaving her teaching position at Vassar College, Hopper was finally assigned to the Bureau of Ships Computation Project at Harvard University, where she was one of the first three computer programmers and developed the first programming language “compiler” which translated english-language instruction into machine code. During her lifetime, Hopper was awarded 40 honorary degrees from universities across the world. A college at Yale University was renamed in her honor. In 1991, she received the National Medal of Technology. On November 22, 2016, she was posthumously awarded the Presidential Medal of Freedom by President Barack Obama.  After receiving the National Medal of Technology, Hopper was quoted saying that:

“If you ask me what accomplishment I’m most proud of, the answer would be all the young people I’ve trained over the years; that’s more important than writing the first compiler.”

Grace Hopper, a woman of dexterity and intellect, is truly worth recognizing.

Why should you celebrate Women’s History Month?

Clearly these women’s contributions have helped shape society today. It is important to point out, however,  that the path these women followed came with many obstacles. Melinda Gates is quoted saying that “A woman with a voice is by definition a strong woman. But the search to find that voice can be remarkably difficult.” In celebrating the lives of these women and Women’s History Month, we must realize that in order for society to fully thrive, we must allow women to find their voice and thrive.

Danielle Ibuaka is a graduate of the Schreyer Honors College at Penn State, where she studied International Politics and Digital Media Trends & Analytics.
PrevNext